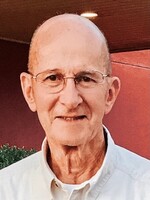 Chuck was born in Kansas City, Kansas, on May 20, 1937. He moved to Dothan in the sixth grade and was a 1955 graduate of Dothan High School. He graduated from Auburn University in 1960 from the School of architecture, where he served as President. He was also a member of Blue Key Honorary and Phi Delta Theta fraternity. After graduating from Auburn, he attended Cranbrook Academy of Art in Bloomfield Hills, Michigan.

Soon after, he served in the Army Reserves and worked for firms in Dothan, Montgomery, and Atlanta. He opened his first practice in Atlanta and while there won the High Museum Southeastern Art Competition Purchase Award with one of his sculpture pieces. In 1977, the family moved to Dothan where Chuck opened his architectural practice. Some of his projects include Water World, Westgate Recreation Center, Region Bank, Ameris Bank, the Criminal Justice Building, Tom West Realty, Kelly Springs School and many more.

Chuck was a member of First United Methodist Church, a member and chairman of the Dothan City School Board, and a charter member and song leader of the Dothan-Houston Co. Rotary Club. Chuck loved time at the beach, the 4th of July, and the American flag. He loved fishing, gardening, Auburn football and time with his friends. Retiring after 52 years, he enjoyed painting in his studio. He loved his family; but most of all, his wife of 60 years, Sue.

The family would like to extend special thanks to Hillview Assisted Living in Graceville, Florida and Covenant Care Hospice.

A private family graveside service will be officiated by Dr. Jim Sanders and directed by Glover Funeral Home. In lieu of flowers, memorials may be made to Respite Ministry, First United Methodist Church, 1380 W. Main St, Dothan, AL 36301.

All rights reserved. This obituary is also archived at obittree.com