To share your memory on the wall of Kenneth Napier, sign in using one of the following options:

Print
Kenneth Deron Napier passed on Sunday, October 4, 2020 at Southeast Health with his wife and daughters by his side. He was 75 years old.

Kenneth was born on March 13, 1945 to Dewey Jr. and Grace (Benton) Napier in Dothan, Alabama. As a ... Read More
Kenneth Deron Napier passed on Sunday, October 4, 2020 at Southeast Health with his wife and daughters by his side. He was 75 years old.

Kenneth was born on March 13, 1945 to Dewey Jr. and Grace (Benton) Napier in Dothan, Alabama. As a boy, he was co-captain of the 1957 World Champion Dixie Youth All-Star Baseball team. Kenny attended Dothan High School where he was known to be an all-around great athlete, but he especially excelled as a baseball player. Because of his baseball talent, Kenny attended the University of Georgia where he played first base on a full baseball scholarship.

As a member of the Alabama Army National Guard, he attended the Alabama Military Academy. Serving his country as a soldier with the National Guard was an honor Kenny held in high regard. He spent 25 years in this service and retired as a Major with many awards and honors.

Kenneth was exceptionally gifted and creative with woodworking and owned Ken Napier Cabinet and Millwork Company until his retirement. His custom work in homes and offices spread throughout the southeast region. Kenny was also an active member of the Board of Directors for Ashford Academy through the 90s and early 2000s. He was a member of Southside Baptist Church.

Kenny’s two main hobbies were hunting and fishing. He looked forward to his yearly fishing trip with his friends to the Everglades in Holiday Park, Florida where they would catch more Oscars than they could unload by themselves. He also enjoyed the friends he hunted with at the Hog-Wild Hunting Club in Fitzpatrick, Alabama. Out of all Kenny’s accomplishments and activities, he considered his family his absolute greatest love.

Kenny was married to his wife, Jennifer Taylor Napier from Elba, Alabama for 48 years. He and Jennifer met on a blind date and the rest was history. Kenny taught his daughters and grandchildren many priceless lessons about life. He loved to tell stories, always had an answer to a question, and was great at making up words to songs when he couldn’t remember the lyrics. His family thought he was the kindest, bravest, and absolute strongest man they ever knew. He was full of compassion and quick to lend a hand to anyone in need.

Kenneth is preceded in death by his parents.

Glover Funeral Home will be honoring Kenneth by caring for all arrangements. Due to COVID and in order to keep all friends and family safe, only a graveside service will be held at 11:00 a.m. Wednesday, October 7, 2020 at Memory Hill Cemetery. Reverend Billy Rich will be officiating. All social distancing and masking guidelines will be observed at the service and no public visitation is scheduled.

Glover Funeral Home of Dothan has been entrusted with the arrangements. (334) 699-3888. Please sign the guestbook online at www.gloverfuneral.com.
Read Less

To send flowers to the family or plant a tree in memory of Kenneth Deron Napier, please visit our Heartfelt Sympathies Store.

Receive notifications about information and event scheduling for Kenneth

We encourage you to share your most beloved memories of Kenneth here, so that the family and other loved ones can always see it. You can upload cherished photographs, or share your favorite stories, and can even comment on those shared by others.

Posted Oct 07, 2020 at 12:17pm
II met Kenny while attending college with Jennifer. He was the love of her life. My thoughts and prayers will be with the family as they deal with his loss.
Judy and Don Prater
Comment Share
Share via:
NL

Posted Oct 07, 2020 at 09:48am
I had the pleasure of getting to know Mr. & Mrs. Napier over the past decade through their daughter, Amanda. From building Christ & Amanda's house, holidays, the birth of both granddaughters, the pool parties for their birthdays, and many drop by just for fun occasions, I grew to love both he and Mrs. Jennifer. I was honored to be one of the people sitting around the pool listening to his stories and watching football at their house. He will be greatly missed and my heart is broken for this DEAR family that I love like my own. I don't even think I ever called them by name. I followed Amanda's greetings and said hey mama and daddy just like her! They would smile and give me the best hugs! Mama, Amanda, and Aleah, my heart is with you as is my prayers. I miss and love you guys more than words can say. Natalie Leighty
Comment Share
Share via:
D

Posted Oct 05, 2020 at 08:53pm
To all the Napier Family, So sorry for the loss of your loved one. May God Bless and give comfort during this time. Deborah Snell& Kevin & Jessi Snell.
Comment Share
Share via: 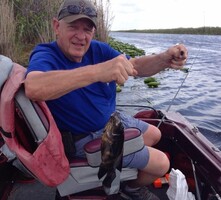